The Indigenous Forest Day, in Portugal, was celebrated by ALERT with an event that has been taking place for the past four years and which has already promoted the planting of around 300 trees in the Peneda-Gerês National Park.

On the afternoon of a sunny Saturday on November 23, 2013, in the company of various other organizations, ALERT employees were responsible for planting about 60 trees, out of a total of 1 500 trees planted by around 250 volunteers, in the scope of an event that had Rui Reininho (a Portuguese singer) as its patron.

This tree planting action was part of the I Meetings on Oak Trees program, which took place at the Vilarinho das Furnas museum on November 23 and 24, an organization of AMO Portugal (Associação Mãos à Obra Portugal), ATAHCA, Associação de Compartes da Campo do Gerês, Terras do Bouro Local Authority, QUERCUS, the Biologists Association, with the purpose to "Reflect on the importance of preserving, valuing and promoting the plantation of indigenous species and to divulge the importance of oak trees for the local economy and related wildlife and flora, as well as oak tree forests in our territory."

Also, during the morning, before the planting took place, acorns were collected, which will germinate into more trees that will eventually be returned to their origin.

In an atmosphere of great solidarity and sharing, in a year that saw the greatest loss of lives in the Fire Brigade corps, a tree was dedicated by ALERT's employees to each firefighter who lost their lives, so that those who risk and lose their life for the Forest will always be remembered. This act was commented and shared in AMO's Facebook page, with photos of all the trees with dedications, and entitled: Homenagem aos Soldados da Paz falecidos em 2013 (Tribute to the Firefighters who lost their lives in 2013). 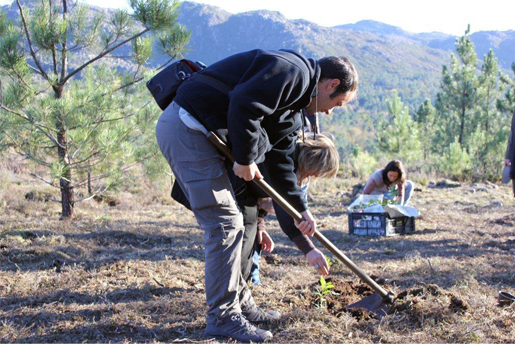